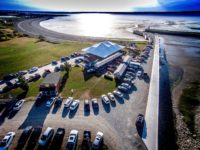 Wow! Do more of what you love and feel great

To book the park for events, including weddings and family reunions, please contact Willi Guy at 902-307-7221.

LEARN MORE ABOUT THE MARKET ON OUR TOURISM WEBSITE

Where the land meets the sea…

The Joseph and Marie Dugas Park is named in honour of a brave Acadian pioneer family. Adversity was not new to Joseph Dugas and his wife Marie-Josephe Robichaud when they set out from Port Royal in 1768. They left by horse, with a four-year-old daughter, Isabelle. You can imagine the hardships the family encountered, such as having to make rafts to cross several rivers. Yet they succeeded. In September 1768 they arrived on the shores of St. Mary’s Bay and became the first permanent settlers of Clare, in present-day Belliveau Cove. Nearby Major’s Point Historic Site commemorates this arrival.

Please Donate
Your personal donation will help make an impact towards acquiring this vessel, thus ensuring its preservation, while honouring the expert shipbuilding craftsmanship of Jean Belliveau.